Welcome to the April 2022 report from the Reproducible Builds project! In these reports, we try to summarise the most important things that we have been up to over the past month. If you are interested in contributing to the project, please take a few moments to visit our Contribute page on our website.

Cory Doctorow published an interesting article this month about the possibility of Undetectable backdoors for machine learning models. Given that machine learning models can provide unpredictably incorrect results, Doctorow recounts that there exists another category of “adversarial examples” that comprise “a gimmicked machine-learning input that, to the human eye, seems totally normal — but which causes the ML system to misfire dramatically” that permit the possibility of planting “undetectable back doors into any machine learning system at training time”. 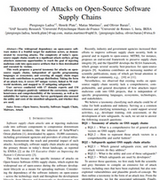 This work proposes a general taxonomy for attacks on open-source supply chains, independent of specific programming languages or ecosystems, and covering all supply chain stages from code contributions to package distribution. Taking the form of an attack tree, it covers 107 unique vectors, linked to 94 real-world incidents, and mapped to 33 mitigating safeguards.

This dissertation starts from the first link in the software supply chain, ‘developers’. Since many developers do not update their vulnerable software libraries, thus exposing the user of their code to security risks. To understand how they choose, manage and update the libraries, packages, and other Open-Source Software (OSS) that become the building blocks of companies’ completed products consumed by end-users, twenty-five semi-structured interviews were conducted with developers of both large and small-medium enterprises in nine countries. All interviews were transcribed, coded, and analyzed according to applied thematic analysis

There was new/further activity on a pull request filed against openssl by Sebastian Andrzej Siewior in order to prevent saved CFLAGS (which may contain the -fdebug-prefix-map=<PATH> flag that is used to strip an arbitrary the build path from the debug info — if this information remains recorded then the binary is no longer reproducible if the build directory changes.

The Linux Foundation’s SupplyChainSecurityCon, will take place June 21st — 24th 2022, both virtually and in Austin, Texas. Long-time Reproducible Builds and openSUSE contributor Bernhard M. Wiedemann learned that he had his talk accepted, and will speak on Reproducible Builds: Unexpected Benefits and Problems on June 21st.

There will be an in-person “Debian Reunion” in Hamburg, Germany later this year, taking place from 23 — 30 May. Although this is a “Debian” event, there will be some folks from the broader Reproducible Builds community and, of course, everyone is welcome. Please see the event page on the Debian wiki for more information. 41 people have registered so far, and there’s approx 10 “on-site” beds still left.

The minutes and logs from our April 2022 IRC meeting have been published. In case you missed this one, our next IRC meeting will take place on May 31st at 15:00 UTC on #reproducible-builds on the OFTC network.

Roland Clobus wrote another in-depth status update about the status of ‘live’ Debian images, summarising the current situation that all major desktops build reproducibly with bullseye, bookworm and sid, including the Cinnamon desktop on bookworm and sid, “but at a small functionality cost: 14 words will be incorrectly abbreviated”. This work incorporated:

On our mailing list, Venkata Pyla started a thread on the Debian debconf cache is non-reproducible issue while creating system images and Vagrant Cascadian posted an excellent summary of the reproducibility status of core package sets in Debian and solicited for similar information from other distributions.

Lastly, 122 reviews of Debian packages were added, 44 were updated and 193 were removed this month adding to our extensive knowledge about identified issues. A number of issue types have been updated as well, including timestamps_generated_by_hevea, randomness_in_ocaml_preprocessed_files, build_path_captured_in_emacs_el_file, golang_compiler_captures_build_path_in_binary and build_path_captured_in_assembly_objects,

Happy birthday to GNU Guix, which recently turned 10 years old! People have been sharing their stories, in which reproducible builds and bootstrappable builds are a recurring theme as a feature important to its users and developers. The experiences are available on the GNU Guix blog as well as a post on fossandcrafts.org

diffoscope is our in-depth and content-aware diff utility. Not only can it locate and diagnose reproducibility issues, it can provide human-readable diffs from many kinds of binary formats. This month, Chris Lamb prepared and uploaded versions 210 and 211 to Debian unstable, as well as noticed that some Python .pyc files are reported as data, so we should support .pyc as a fallback filename extension […].

In addition, Mattia Rizzolo disabled the Gnumeric tests in Debian as the package is not currently available […] and dropped mplayer from Build-Depends too […]. In addition, Mattia fixed an issue to ensure that the PATH environment variable is properly modified for all actions, not just when running the comparator. […]