Welcome to the April 2019 report from the Reproducible Builds project! In these now-monthly reports we will outline the most important things which we have been up to in and around the world of reproducible builds & secure toolchains.

As a quick recap, whilst anyone can inspect the source code of free software for malicious flaws, almost all software is distributed to end users pre-compiled. The motivation behind reproducible builds effort is to ensure no flaws have been introduced during this compilation process by promising identical results are always generated from a given source, thus allowing multiple third-parties to come to a consensus on whether a build was compromised.

The first non-trivial library written in the Scala programming language on the Java Virtual Machine was released with Arnout Engelen’s sbt-reproducible-builds plugin enabled during the build. This resulted in Akka 2.5.22 becoming reproducible, both for the artifacts built with version 2.12.8 and 2.13.0-RC1 of the Scala compiler. For 2.12.8, the original release was performed on a Mac and the validation was done on a Debian-based machine, so it appears the build is reproducible across diverse systems. (Mailing list thread)

Jeremiah “DTMB” Orians announced the 1.3.0 release of M2-Planet, a self-hosting C compiler written in a subset of the features it supports. It has been bootstrapped entirely from hexadecimal (!) with 100% reproducible output/binaries. This new release sports a self-hosting port for an additional architecture amongst other changes. Being “self-hosted” is an important property as it can provide a method of validating the legitimancy of the build toolchain.

The Go programming language has been making progress in making their builds reproducible. In 2016, Ximin Luo had created issue #16860 requesting that the compiler generates the same result regardless of the path in which the package is built. However, progress was recently made in Change #173344 (and adjacent) that will permit a -trimpath mode that will generate binaries that do not contain any local path names, similar to -fpath-prefix-map.

The fontconfig library for configuring and customising font access in a number of distributions announced they had merged patches to allow various cache files to be reproducible. This is after Chris Lamb posted a historical summary and a request for action to Fontconfig’s mailing list in January 2019

Holger Levsen started a discussion regarding the distribution of .buildinfo files. These files record the environment that was used as part of a particular build in order that — along with the source code — ensure that the aforementioned environment can be recreated at a later date to reproduce the exact binary. Distributing these files is important so that others can validate that a build is actually reproducible. In his post, Holger refers to two services that now exist, buildinfo.debian.net and buildinfos.debian.net.

In addition, Holger restarted a long-running discussion regarding the reproducibility status of Debian buster touching on questions of potentially performing mass rebuilds of all packages in order that they use updated toolchains.

There was yet more progress towards making the Debian Installer images reproducible. Following-on from last months, Chris Lamb performed some further testing of the generated images. Cyril Brulebois then made an upload of the debian-installer package to Debian that included a number of Chris’ patches and Vagrant Cascadian filed a patch to fix the reproducibility of “u-boot” images by using -n argument to gzip(1).

This month, Chris Lamb did a lot of development of diffoscope, including:

In addition, Vibhu Agrawal ensured that diffoscope failed more gracefully when running out of diskspace to resolve Debian bug #874582 and Vagrant Cascadian updated to diffoscope 114 in GNU Guix. Thanks!

strip-nondeterminism is our tool to remove specific non-deterministic results from a completed build. It is used automatically in most Debian package builds. This month, Chris Lamb made the following improvements:

Chris then uploaded version 1.1.3-1 to the Debian experimental distribution.

Chris Lamb made a number of improvements to our project website this month, including: 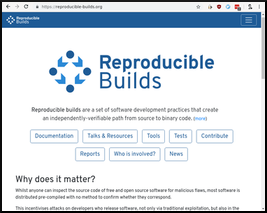