Welcome to the latest report from the Reproducible Builds project. In this post, we round up the important things that happened in the world of reproducible builds in August 2021. As always, if you are interested in contributing to the project, please visit the Contribute page on our website.

There were a large number of talks related to reproducible builds at DebConf21 this year, the 21st annual conference of the Debian Linux distribution (full schedule):

PackagingCon (@PackagingCon) is new conference for developers of package management software as well as their related communities and stakeholders. The virtual event, which is scheduled to take place on the 9th and 10th November 2021, has a “mission is to bring different ecosystems together: from Python’s pip to Rust’s cargo to Julia’s Pkg, from Debian apt over Nix to conda and mamba, and from vcpkg to Spack we hope to have many different approaches to package management at the conference”. A number of people from reproducible builds community are planning on attending this new conference, and some may even present. Tickets start at $20 USD.

As reported in our May report, the president of the United States signed an executive order outlining policies aimed to improve the cybersecurity in the US. The executive order comes after a number of highly-publicised security problems such as a ransomware attack that affected an oil pipeline between Texas and New York and the SolarWinds hack that affected a large number of US federal agencies. As a followup this month, however, a detailed fact sheet was released announcing a number large-scale initiatives and that will undoubtedly be related to software supply chain security and, as a result, reproducible builds.

Lastly, we ran another productive meeting on IRC in August (original announcement) which ran for just short of two hours. A full set of notes from the meeting is available.

kpcyrd announced an interesting new project this month called “I probably didn’t backdoor this” which is an attempt to be:

… a practical attempt at shipping a program and having reasonably solid evidence there’s probably no backdoor. All source code is annotated and there are instructions explaining how to use reproducible builds to rebuild the artifacts distributed in this repository from source.

The idea is shifting the burden of proof from “you need to prove there’s a backdoor” to “we need to prove there’s probably no backdoor”. This repository is less about code (we’re going to try to keep code at a minimum actually) and instead contains technical writing that explains why these controls are effective and how to verify them. You are very welcome to adopt the techniques used here in your projects. (…)

As the project’s README goes on the mention: “the techniques used to rebuild the binary artifacts are only possible because the builds for this project are reproducible”. This was also announced on our mailing list this month in a thread titled i-probably-didnt-backdoor-this: Reproducible Builds for upstreams.

kpcyrd also wrote a detailed blog post about the problems surrounding Linux distributions (such as Alpine and Arch Linux) that distribute compiled Python bytecode in the form of .pyc files generated during the build process.

diffoscope is our in-depth and content-aware diff utility. Not only can it locate and diagnose reproducibility issues, it can provide human-readable diffs from many kinds of binary formats. This month, Chris Lamb made a number of changes, including releasing version 180), version 181) and version 182) as well as the following changes:

In Debian, 68 reviews of packages were added, 33 were updated and 10 were removed this month, adding to our knowledge about identified issues. Two new issue types have been identified too: nondeterministic_ordering_in_todo_items_collected_by_doxygen and kodi_package_captures_build_path_in_source_filename_hash.

kpcyrd published another monthly report on their work on reproducible builds within the Alpine and Arch Linux distributions, specifically mentioning rebuilderd, one of the components powering reproducible.archlinux.org. The report also touches on binary transparency, an important component for supply chain security.

The @GuixHPC account on Twitter posted an infographic on what fraction of GNU Guix packages are bit-for-bit reproducible: 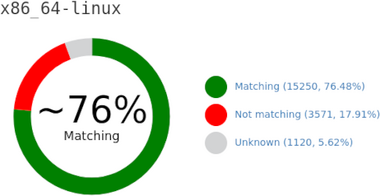 Elsewhere, it was discovered that when supporting various new language features and APIs for Android apps, the resulting APK files that are generated now vary wildly from build to build (example diffoscope output). Happily, it appears that a patch has been committed to the relevant source tree. This was also discussed on our mailing list this month in a thread titled Android desugaring and reproducible builds started by Marcus Hoffmann.

There were quite a few changes to the Reproducible Builds website and documentation this month, including:

The Reproducible Builds project runs a testing framework at tests.reproducible-builds.org, to check packages and other artifacts for reproducibility. This month, the following changes were made:

Lastly, if you are interested in contributing to the Reproducible Builds project, please visit the Contribute page on our website. You can get in touch with us via: