Welcome to the August 2020 report from the Reproducible Builds project.

In our monthly reports, we summarise the things that we have been up to over the past month. The motivation behind the Reproducible Builds effort is to ensure no flaws have been introduced from the original free software source code to the pre-compiled binaries we install on our systems. If you’re interested in contributing to the project, please visit our main website.

This month, Jennifer Helsby launched a new reproduciblewheels.com website to address the lack of reproducibility of Python wheels.

Parallel to this, transparencylog.com was also launched, a service that verifies the contents of URLs against a publicly recorded cryptographic log. It keeps an append-only log of the cryptographic digests of all URLs it has seen. (GitHub repo)

There were a number of talks at the recent online-only DebConf20 conference on the topic of reproducible builds. 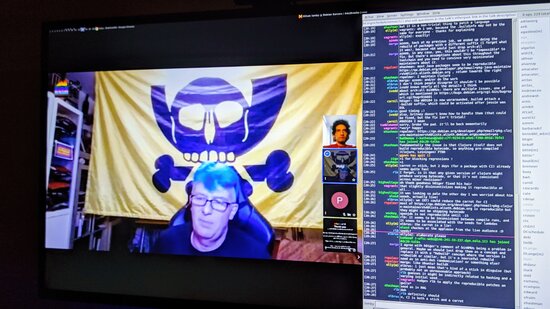 Holger gave a talk titled “Reproducing Bullseye in practice”, focusing on independently verifying that the binaries distributed from ftp.debian.org are made from their claimed sources. It also served as a general update on the status of reproducible builds within Debian. The video (145 MB) and slides are available.

There were also a number of other talks that involved Reproducible Builds too. For example, the Malayalam language mini-conference had a talk titled എനിയ്ക്കും ഡെബിയനില്‍ വരണം, ഞാന്‍ എന്തു് ചെയ്യണം? (“I want to join Debian, what should I do?”) presented by Praveen Arimbrathodiyil, the Clojure Packaging Team BoF session led by Elana Hashman, as well as Where is Salsa CI right now? that was on the topic of Salsa, the collaborative development server that Debian uses to provide the necessary tools for package maintainers, packaging teams and so on.

After many years of development work, the compiler for the Rust programming language now generates reproducible binary code. This generated some general discussion on Reddit on the topic of reproducibility in general.

Paul Spooren posted a ‘request for comments’ to OpenWrt’s openwrt-devel mailing list asking for clarification on when to raise the PKG_RELEASE identifier of a package. This is needed in order to successfully perform rebuilds in a reproducible builds context.

Chris Lamb provided some comments and pointers on an upstream issue regarding the reproducibility of a Snap / SquashFS archive file. […]

Holger Levsen identified that a large number of Debian .buildinfo build certificates have been “tainted” on the official Debian build servers, as these environments have files underneath the /usr/local/sbin directory […]. He also filed against bug for debrebuild after spotting that it can fail to download packages from snapshot.debian.org […].

This month, several issues were uncovered (or assisted) due to the efforts of reproducible builds.

For instance, Debian bug #968710 was filed by Simon McVittie, which describes a problem with detached debug symbol files (required to generate a traceback) that is unlikely to have been discovered without reproducible builds. In addition, Jelmer Vernooij called attention that the new Debian Janitor tool is using the property of reproducibility (as well as diffoscope when applying archive-wide changes to Debian:

New merge proposals also include a link to the diffoscope diff between a vanilla build and the build with changes. Unfortunately these can be a bit noisy for packages that are not reproducible yet, due to the difference in build environment between the two builds. […]

56 reviews of Debian packages were added, 38 were updated and 24 were removed this month adding to our knowledge about identified issues. Specifically, Chris Lamb added and categorised the nondeterministic_version_generated_by_python_param and the lessc_nondeterministic_keys toolchain issues. […][…]

Holger Levsen sponsored Lukas Puehringer’s upload of the python-securesystemslib pacage, which is a dependency of in-toto, a framework to secure the integrity of software supply chains. […]

Lastly, Chris Lamb further refined his merge request against the debian-installer component to allow all arguments from sources.list files (such as [check-valid-until=no]) in order that we can test the reproducibility of the installer images on the Reproducible Builds own testing infrastructure and sent a ping to the team that maintains that code.

diffoscope is our in-depth and content-aware diff utility that can not only locate and diagnose reproducibility issues, it provides human-readable diffs of all kinds. In August, Chris Lamb made the following changes to diffoscope, including preparing and uploading versions 155, 156, 157 and 158 to Debian:

In addition, Mattia Rizzolo documented in setup.py that diffoscope works with Python version 3.8 […] and Frazer Clews applied some Pylint suggestions […] and removed some deprecated methods […].

This month, Chris Lamb updated the main Reproducible Builds website and documentation to:

The Reproducible Builds project operate a Jenkins-based testing framework to power tests.reproducible-builds.org. This month, Holger Levsen made the following changes:

Many other changes were made too, including:

On our mailing list this month, Leo Wandersleb sent a message to the list after he was wondering how to expand his WalletScrutiny.com project (which aims to improve the security of Bitcoin wallets) from Android wallets to also monitor Linux wallets as well:

If you think you know how to spread the word about reproducibility in the context of Bitcoin wallets through WalletScrutiny, your contributions are highly welcome on this PR […]

Julien Lepiller posted to the list linking to a blog post by Tavis Ormandy titled You don’t need reproducible builds. Morten Linderud (foxboron) responded with a clear rebuttal that Tavis was only considering the narrow use-case of proprietary vendors and closed-source software. He additionally noted that the criticism that reproducible builds cannot prevent against backdoors being deliberately introduced into the upstream source (“bugdoors”) are decidedly (and deliberately) outside the scope of reproducible builds to begin with.

Chris Lamb included the Reproducible Builds mailing list in a wider discussion regarding a tentative proposal to include .buildinfo files in .deb packages, adding his remarks regarding requiring a custom tool in order to determine whether generated build artifacts are ‘identical’ in a reproducible context. […]

Jonathan Bustillos (Jathan) posted a quick email to the list requesting whether there was a list of To do tasks in Reproducible Builds.

Lastly, Chris Lamb responded at length to a query regarding the status of reproducible builds for Debian ISO or installation images. He noted that most of the technical work has been performed but “there are at least four issues until they can be generally advertised as such”. He pointed that the privacy-oriented Tails operation system, which is based directly on Debian, has had reproducible builds for a number of years now. […]