When is a build “reproducible”?

A build is reproducible if, given the same source code, build environment and build instructions, any party can recreate bit-by-bit identical copies of all specified artifacts.

The relevant attributes of the build environment, the build instructions and the source code, as well as the expected reproducible artifacts, are defined by the authors. The artifacts of a build are the parts of the build results that are the desired primary output.

Examples Section (NOT part of the definition)

Source code is usually a version control checkout at a specific revision or a source code archive.

Artifacts, for example, would include executables, distribution packages or filesystem images. They would usually not include a build log or similar secondary outputs.

The reproducibility of artifacts is verified by bit-by-bit comparison. This is usually achieved using checksums (better: strong/cryptographically secure hash functions such as implemented in sha256sum; thanks, added. I don’t want to specifically mention an algorithm, though).

We’ve looked at the GNU discussion on the r-b@ list; we think our definition is a superset.

Not bit-by-bit identical but similar (according to $algorithm) builds shall henceforth be referred to as “equivalent builds”. 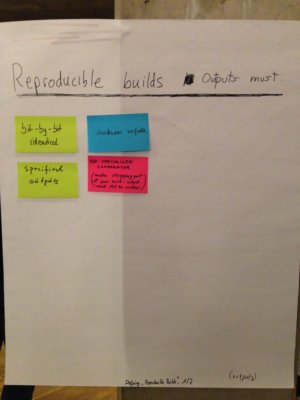 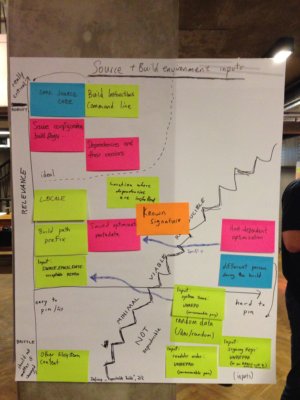