security = legal enforcement backdoors How is this different from malicious backdoors?

increased development speed by limiting number of rebuilds of dependent packages => lower cost Build systems can be significantly faster to rebuild software if the build is reproducible. It improves caching and reuse of artifacts. Tests don’t need to be rerun if the binary hasn’t changed. Submitted: https://lists.reproducible-builds.org/pipermail/rb-general/2016-December/000192.html

increased development speed by less QA work before release = because you can verify that large parts did not change => better security by reduced exposure time to 0day exploits Submitted: https://lists.reproducible-builds.org/pipermail/rb-general/2016-December/000187.html

prove that cross-compompiling generates same result as native compiling and then speed up build on slow architectures (e.g. x86_64 is faster than arm) = in the long run spending more time on core instead of on toolchain Submitted: https://lists.reproducible-builds.org/pipermail/rb-general/2016-December/000192.html

quality = r-b implies being able to rebuild in an automated way (which is not a given in some places), so can help business-continuity and also security when it makes it easier/possible to add security patches

easier to rebuild binaries from source = more developers/happyness = not one developer being a SPOF knowing about a build, reduced responsibility of individual developers

out-of-scope (list of problems not to be solved by r-b): * having understandable source code * having source code without backdoors or exploitable bugs * trusting hardware (some improvements with cross-compilation and emulation reproducing same binaries) *

Ensure your developers are using the real, official toolchain and libraries

For mobile development, developers are often downloading the toolchains and libraries via sources that are difficult or impossible to verify.

Find developers who are using unofficial or bad versions of tools and/or libraries. This also isolates the release process from all of the problems and risks associated with the developers’ own machines. cl: I think this is sufficiently documented in https://reproducible-builds.org/docs/buy-in/ with the ‘Resisting Attacks’ section on Xcode Ghost. 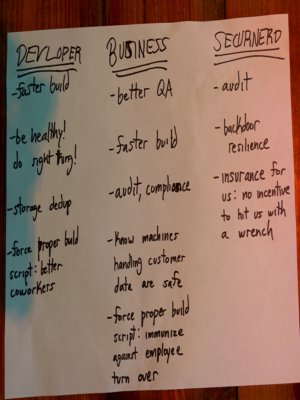