(A couple of the raw post-it notes reproduced below, expanded with a little more context)

Reproducible builds are becoming available – now it’s time to answer questions about how we want regular users (not just developers and advanced system administrators) to experience the benefits.

Changing package managers so that they will ONLY install builds which are reproducibile seems like one likely avenue (both to improve end-user security, and to incentivize distro packages to demand reproducibility before releasing).

We believe it is necessary to SHOW the full records of multiple builds to the end-user’s package manager, so that the package manager can locally confirm that the builds were reproducible – there is no improvement if we simply trust a single signature from an upstream claiming a package is reproducible: we want to see multiple signitures of independent parties who performed their own builds.

Future work is necessary to describe how we identify different builders, how we share their logs, and how we should determine which build records are appropriate to compare. 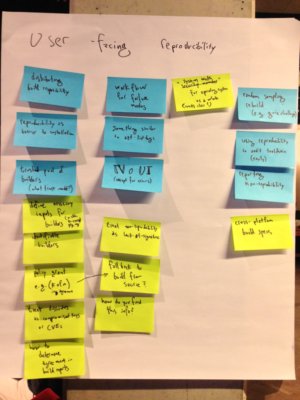